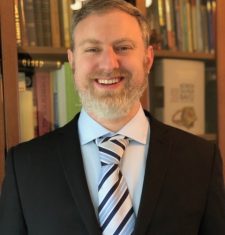 David-Yehuda – affectionately known as ‘D.Y.’ – is a final year rabbinical student at Leo Baeck College who is supporting our community until June 2022.

DY has been working and volunteering in Jewish organisations for over 15 years and their first major role was heading up Jewish Social Responsibility at UJIA. Since then they have coordinated social action and sustainability projects for JW3; headed up youth and education at North Western Reform Synagogue (Alyth); and overseen the Cheder at New London Synagogue.

DY holds a BA in Film and Television Studies from the University of Nottingham and an MA in Jewish Education from the London School of Jewish Studies (LSJS).

DY is married to Robin and has two children, Aviva and Ora.