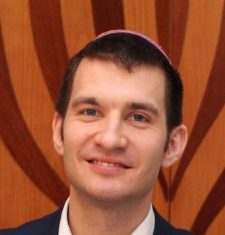 Rabbi Mati was born in Wroclaw, Poland. He grew up secular as his family kept their Jewish heritage a secret to avoid communist persecution. Mati got interested in religious aspects of Jewish life in his late teens. Upon graduation from high school, Mati moved to Warsaw to study economics and business. While at university, Mati spent extended periods abroad, studying and interning in Georgia (Caucasus), India and Russia. These sojourns abroad made Mati realise how much he cherished the sense of belonging that the Polish Jewish community offered him. Motivated by this sentiment, upon graduation, Mati pursued a career in the Jewish non-profit sector in Warsaw and contributed to the establishment of a Progressive congregation within the Jewish Community of Warsaw.

The combination of Mati’s professional and religious involvement in Jewish sparked his interest in pursuing Progressive rabbinate. Mati’s journey to the Rabbinate took him to Abraham Geiger Kolleg, Germany, before studying at Conservative Yeshiva, Hebrew Union College, and the Shalom Hartman Institute – all in Jerusalem. He began his studies at Leo Baeck College in 2018 where he completed his training in 2020. Rabbi Mati feels honoured to start his career as a rabbi at BRS.

In his free time, Rabbi Mati likes to read about world history and politics, to learn foreign languages, and to discover the beauty of his local area on foot and by bike. He is excited to explore South East London.